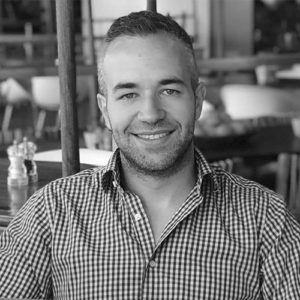 Adam Pantanowitz is a fanatical technologist, who enjoys solving seemingly unsolvable problems, particularly with the help of cloud computing and machine learning. He is part of the SingularityU South Africa faculty with a focus on biotechnology and speaks about the future of technology with a focus on tech-human convergence.

He is no stranger to lecturing and has been passing on the baton in the faculties of engineering and medicine at the University of the Witwatersrand, Johannesburg since 2009.

Since studying biomedical and electrical engineering, he has worked in the fields of biotech and software. His innovations have resulted in a number of patents, academic papers and creations. Some of his other collaborative innovations include a hands-free controlled surgery interaction system, CPR monitoring system and a computer-based sign language interpreter.

Adam is a Fellow of The Institution of Engineering and Technology (IET) and is chartered internationally as an engineer. He

co-founded businesses AURA, Tariffic, Lawbuntu, among others and acted as CTO of indirect tax fintech business.

He is a member of the SingularityU South Africa faculty with a focus on biotechnology, the future of technology, and the likely possibility that tech-human convergence will be the norm in the future. Being on stage is second nature for him as he has been lecturing Engineering and Medicine at the University of the Witwatersrand, Johannesburg since 2009.

Just as he is passionate about teaching, he is driven to find solutions to various problems through establishing innovative businesses, especially where there is a gap in the market and potential for economic development. Adam co-founded a number of businesses in the technology space, such as: AURA, Tariffic, Lawbuntu, among others. He also acted as CTO of VATIT, the world’s largest VAT reclaim business, which equipped him with a new set of skills and business experience.

Technologist, innovator, problem solver in the fields of biotech and software

People have often referred to Adam as a fanatical technologist. Technology is a large part of who he is and drives his lectures, research and businesses. He specialise in the fields of biotech and software, and is always tinkering with something new – imagine the stuff of sci-fi novels and movies, where human and machine merge. “Brainternet” was the world’s first, portable brain-internet livestream, while his other collaborative projects include an eye-controlled wheelchair, a non-cognitive brain transmission channel and a thought-controlled robotic arm. He is always searching for solutions as to how technology can aid humanity.