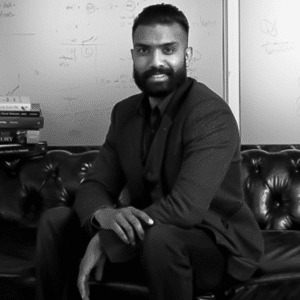 Ashley was born in South Africa at a time when the country was experiencing its first seedlings of hope towards democracy and freedom. From a young age he had an avid curiosity to understand why things worked in a certain way, which soon developed into an obsession with problem solving, believing that every problem had a clear and thought-out solution. Ashley realised that solving problems was an art and science, which if applied correctly could generate wealth, which in turn allowed for more problems to be solved.

Today, with degrees in Physics and Mathematics under his belt, Ashley is a business owner and entrepreneur, who has committed his attention and energy to solving some of South Africa’s toughest problems by introducing data-driven applications intended to revolutionise business and Africa.

Ashley is co-founder and CEO of Isazi Consulting, a South African-owned level 1 BBBEE company. The term Isazi means “quest for thirst” in isiZulu and aptly describes Ashley’s insatiable thirst to understand the mathematical levers that control how businesses make money. His entrepreneurial talents are most evident when designing solutions based on the insights gleaned through Artificial Intelligence and Machine Learning.

When he’s not in his office or super servicing his clients, Ashley can be found at home, immersing himself in biographies of fallen heroes or enjoying the rhythmic lyrics and tempo of Jazz.

As co-founder and CEO of Isazi Consulting, Wits graduate Ashley Anthony has taken his knowledge as a geophysicist and applied it to investment banking, mining and environmental management. This has placed him in a position to provide sustainable solutions through the integration of science and business with a major focus on developing Africa.

His team consists of individuals from the fields of computer science, biomedical, information and electrical engineering, physics, applied and pure mathematics, and financial mathematics. Isazi Consulting assists businesses to become data-driven by using Artificial Intelligence and optimisation, while working with large data sets. His company has worked in the fields of airline optimisation, traffic control, the mining industry, pharmaceuticals, fraud detection as well as disease control among others. His company’s mission statement is to solve some of South Africa’s toughest problems by revolutionising businesses and the education landscape.