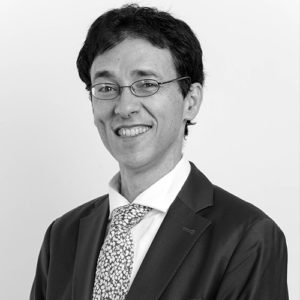 Taddy Blecher is part of the SingularityU South Africa faculty with a focus on Exponential Education. He is the CEO of the Maharishi Institute and the Imvula Empowerment Trust.

Taddy is a pioneer of South Africa’s free tertiary education movement and has helped establish six free-access institutions of higher learning. He also co-founded the Branson Centre of Entrepreneurship with Sir Richard Branson.

As a qualified actuary and management consultant, Taddy is passionate about the approach of Consciousness-Based Education, which develops the full potential of every student.

He is a member of the SingularityU South Africa faculty with a focus on the future of education. As a pioneer of the free tertiary education movement in South Africa he has helped establish six free-access institutions of higher learning. He believes that access to holistic education is necessary for transformation, equality and the economic development of the country.

The Future of Education pioneer

He sits at the helm of several organisations pioneering innovation in education, such as the Maharishi Invincibility Institute, The Imvula Empowerment Trust, and The Community and Individual Development Association. He is also the Chairperson of the South African National Government Council on entrepreneurship, education and job creation, and co-founded the Branson Centre of Entrepreneurship alongside Sir Richard Branson. These roles have given him great insight into the shortcomings and opportunities of our education landscape and how they should be tackled, alongside exponential technologies.

He has helped to raise over R500 million in cash, property and equity to support free access to post-secondary school education. As a result, over 17 580 unemployed South Africans have been educated, found employment and moved from poverty to the middle class. These formerly unemployed youth now have combined salaries in excess of R1 billion per annum and expected lifetime earnings of R28.3 billion. Over 600 000 young South Africans in schools have been reached with one-week education and life-skills training courses.

He is a World Economic Forum (WEF) Global Leader of Tomorrow award recipient and Young Global Leader of the World, and has received two honorary doctorates. He was also thrilled to be chosen as one of 21 Icons in South Africa and South Africa’s Man of the Year for Education in 2018.

As a qualified actuary and management consultant, he is passionate about the approach of Consciousness-Based Education, a system of education that develops the full potential of every student through various vital skill sets. This approach has led the Maharishi Institute to win the first prize in a global competition to find the world’s most promising and innovative education initiative.